I suppose having just finished 8 weeks of Shakespeare in the park has caused me to think about the differences between shakespeare and scripture. Personally I always hated doing the shakespeare books at school, so I guess this is life’s way of getting me back (ha ha ha) I have been doing different shows for the first 2 months for the past 8 years. So word of advice, don’t things with passion, you might just end up having to do shows of it.

I know all the english stalwarts will have me slaughtered for saying this, but I really don’t see the big deal about the plays written. I think that its pretty much 16th century sewende laan (south african soapie). Obviously if you write about human relationships it will be timeless. But anyway thats my opinion hey don’t shoot me.

Anyway on to topic. The differences. Shakespeare plays are mostly about romance (star crossed lovers/Romeo and Juliet) and there will always be some form of changing of characters. Someone will present or misrepresent themselves to others and the result a good comedy. There are some really evil plays too (Macbeth comes to mind here). Don’t get me wrong, I think he was good and brilliant and all that. I just don’t see why all the study of his work and trying to see the deeper meaning. Is there a deeper and if so, did he really think that when writing it?

So as to the differences between scripture and shakespeare here goes : 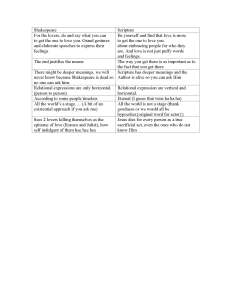 Please click on the picture so you can read the table.

Anyway today is more the fun of ripping shakespeare hey, so don’t get too offended. The ladies should love him though, he popularized the whole romance falling in love thing. Now we all have to be nice to women (eish eish).

But on a serious note. The biggest notable difference of scripture is that you can build a whole life truth out of it. For example “Do unto others as you would have them do unto you” can be used to build a community, a nation, a world and if applied it would change the world literally. I don’t think we can say the same for shakespeare can we?

1 thought on “shakespeare vs scripture”